The National Urban League today released a comprehensive framework for criminal justice advocacy that takes a holistic approach to public safety, the restoration of trust between communities and law enforcement, and a path forward for meaningful change.

21 Pillars for Redefining Public Safety and Restoring Community Trust centers on five key themes that are fundamental to the protection and preservation of life, dignity, and trust, while also building safer communities.

Today, we saw justice rendered as a guilty verdict was announced convicting Derek Chauvin in the death of George Floyd. This justice was not only for George Floyd, but for Black and minority communities as a whole. Today, we saw hope restored. With bated breath, we watched a jury of ordinary citizens who understood right from wrong and invoked a verdict that shifted the consciousness of the world closer to hope. Hope that justice is possible. Justice, not only in the criminal justice system, but in all systems that continue to serve as barriers of all inequities: Housing, Education, Employment, Health, Income, and Entrepreneurship.

As an affiliate of the oldest civil rights organization in the nation, the Urban League of Hampton Roads will continue to take the baton and unceasingly stride in the race for equity and justice. We remain steadfast to our mission to enable African Americans to secure economic self-reliance, parity and power and civil rights. 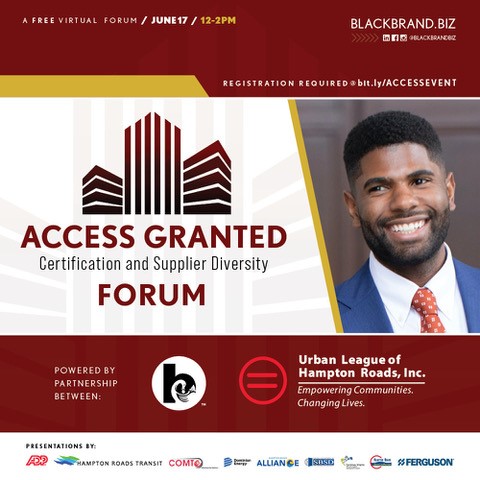 Black business owners will learn about:

Bank on Your Success

Help Us Celebrate Financial Literacy Month by joining us for two free virtual workshops “Bank on Your Success” on April 20 & May 18, 2021 from Noon to 2pm.
You’ll learn financial strategies and how to budget during a crisis. These workshops are presented by The Hampton Roads Workforce Council, The Urban League of Hampton Roads and Truist Bank.

Welcome to the
Urban League of Hampton Roads

THE MISSION OF THE URBAN LEAGUE OF HAMPTON ROADS, INC

The mission of the Urban League of Hampton Roads, Inc. (ULHR) is to enable African Americans and others to secure economic self-reliance, parity and power and civil rights.

The ULHR implements its mission by providing services and programs in education,employment, health, and housing to Hampton Roads communities through direct services, advocacy, research, policy analysis, community mobilization and collaboration throughout communities.

The Urban League of Hampton Roads, Inc. was founded in 1978 with a mission to assist African-Americans and others in the achievement of social and economic equality.

These programs work to lessen the achievement gap between African Americans and other minorities to the larger community. This gap threatens the quality of life and the development of a world-class workforce.

The Urban League of Hampton Roads prides itself on finding living wage jobs and workplace equity for its “job-seeking” clients. Employers are also primary customers. The League improves the quality of the workforce through partnerships with educators and the business community.

The Urban League of Hampton Roads strives to balance advocacy with direct services that seek to remedy conditions and lifestyles that leads to poor health. From education strategies, community outreach, door-to-door canvassing and group presentations, the Urban League partners with community organizations to disseminate health information.

The Urban League of Hampton Roads, Inc. is a US Department of Housing and Urban Development (HUD) HUD Approved Counseling Agency. In 2020, ulhr invested over $350,000 for nearly 700 clients who gained practical homebuying knowledge from lenders, real estate agents and inspectors to become first time homebuyers.

WITH YOUR CHANGE WE’RE ABLE TO MAKE A CHANGE

All disabilities are managed on an as needed basis. The Urban League of Hampton Roads, Inc. office is located on the first floor. Doorways to the building entrance and offices are ADA accessible. Regardless of the impairment counseling services are delivered face-to-face, telephone, home visits, etc. to the following individuals: